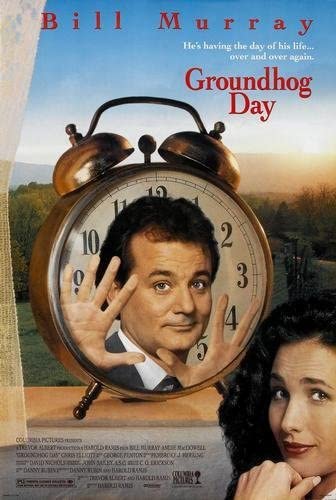 In our house, it is a February tradition to watch the Harold Ramis film Groundhog Day. The film, starring Bill Murray, Andie MacDowell, and Chris Elliott, was released in 1993 and has continued to gain popularity. According to IMDB it is one of the best films of that year, topping Schindler’s List and Jurassic Park in popularity and earning a BAFTA Film award, among other accolades. Many consider it to be one of the best movies of all time.

Murray plays Phil Connors, a self-absorbed Pittsburg Weather Man who is insulted by having to cover the Groundhog Day celebration in Punxsutawney, PA, and their resident groundhog weather man, Punxsutawney Phil—also named Phil.

The film influenced popular culture by helping to coin the phrase “Groundhog Day,” which refers to a repetitive or monotonous task or situation. Phil gets caught in a time loop that causes him to relive the same day, February 2nd, over and over. The movie has also spawned a contemporary phenomenon on social media and in text messages of engaging friends in arcane-quote-battles (or so I’ve heard).

Religious groups, psychoanalysts, economists, and even the military have embraced the film as an allegory for their particular beliefs. It is said that Murray and Ramis argued over the tone of the film but as often-is-the-case, great films can transcend (thankfully) the people who create them. A film maker friend once told me that most creators don’t think about subtext when they are making a film because they are just focused on getting it done. He said, “it’s the movie goers and the critics who come up with what a film ‘means.’”

But we’ve all been stuck in a time loop since 2020, haven’t we? Everyone keeps hoping that one day someone will declare that the pandemic is over and we can all get on with our lives. But just as Phil can’t be certain if tomorrow will be Groundhog Day or if it will finally be February 3, we’ll just have to wait and see.

We won’t know for sure until after that clock-radio flips over to 6:00 am and the sound of Sonny and Cher fills the air for the final time. Of course, many fans of the film say that it was only after Phil began to feel genuine compassion and concern for others, more than himself, that he could be freed from his (likely) self-induced time loop. Maybe that’s true for the pandemic as well. I don’t know, but it couldn’t hurt to try.

Lately, I’ve been in my own little Groundhog Day which was put into perspective for me by an automobile. On New Year’s Day, the clock in our car got stuck on January 1, 2022 at 1:00 pm. After some clever fiddling with the system software, we now have it stuck on January 1, 2022—at 3:00 pm. An internet search revealed that the navigation systems on certain car models have a glitch that may—or may not—correct itself sometime in August 2022. In the meantime, we are stuck just like Phil.

In 2020, I challenged myself to work more on my writing, and I was proud that I was able to create a new blog post every month for more than a year. But life and work can interfere with the best laid plans of mice and men, and I began to notice that while I completed a full list of tasks every day, I wasn’t making progress in other areas that were important to me.

I wrote a blog in September 2020 titled Stop the World (and let me off) Lessons Learned from a Pandemic. It was about how creatives were dealing with the isolation and challenges of the pandemic. Now, two years later it is clear that pandemic fatigue is still affecting me—along with everyone else. It seems there is more learning and adapting to do, but I’m OK with that.

So, for now, I think Phil Connors had the right idea though: focus on the people in your life and look for ways to be a better you—for them!